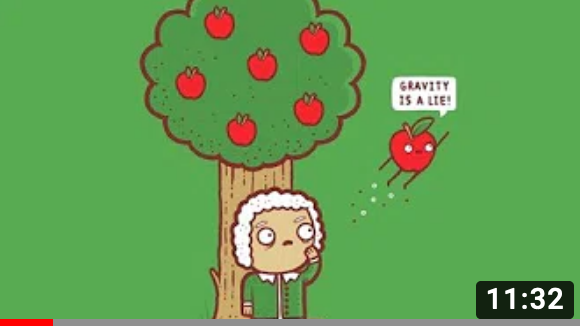 Long before the theory of gravity was a glimmer in Newton’s imagination, the natural physics of density and buoyancy already perfectly explained why apples fall down. Quite simply, objects fall or rise based on their relative density to the medium surrounding them. Apples fall because they are denser than the air, while helium balloons rise because they are lighter – no ‘gravity’ necessary. This is why raindrops fall down through the air and air-bubbles rise up through water! Everything seeks its relative density and rises or falls until settling accordingly. This is why a tiny pebble sinks to the bottom of the ocean, but gigantic cruise-ships and aircraft carriers stay afloat on the surface, because even though a pebble is so small, its mass relative to its volume (its density) is more than water, so it sinks, and even though a cruise-ship is so large, its mass relative to its volume is less than water, so it floats.

If Newton’s apple had landed in a puddle instead of on his head, he would have seen the apple only fell through the air because it was denser than the air, but then floated on top of the water because it was less dense than water. Have you ever noticed how its easier to stay afloat with your lungs full of air than it is when they’re empty? Submarines float on the surface when their ballast tanks are filled with air, but when the vents are opened and seawater floods in, they begin to sink as the submarine’s density becomes greater than water. Depending what depth they wish to dive sailors simply adjust the ratio of air/water in the tanks, and when ready to re-surface they blow compressed air into the tanks forcing the seawater out, lowering the density, and thus causing them to rise back to the surface.

We can also prove this fact of relative density by filling a balloon with approximately half helium and half air. Since helium is lighter than the oxygen, nitrogen and other gases that compose the air around us, filling a balloon with just the right amount of helium to compensate for and balance out the density of the plastic results in a ‘gravity-defying’ levitating balloon at equilibrium that neither rises nor falls!