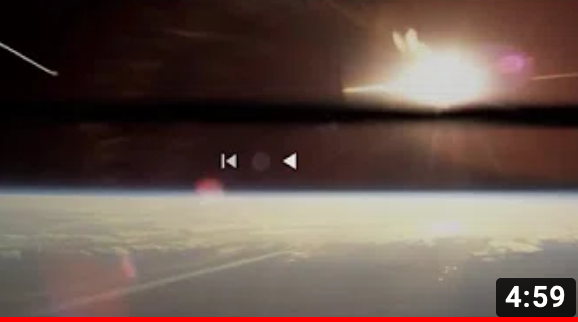 How is it possible? I got the first photo of THE biblical dome! Well, the first PUBLICALLY AVAILABLE one. It is something you can do too! I first believed it was there, so I thought it would be possible, and knew high-altitude balloons approached the surface of the Dome Firmament. I believed if it indeed is there, the camera only had to point up, which usually happens when the balloon “pops”. I where’s disappointed at first as nothing seem to show him the screenshots but then I processed the image with different values for exposure brightness contrast and more. WOW, it worked! The images are amazing, even mystical, and I haven’t ascertained everything in them yet. How does one negate pareodelia? By posting on youtube and reading comments, of course! It obviously has a grid pattern. I didn’t know if I’d ever see anything to corroborate my discovery. But I saw something that is apparently the EXACT SAME GRID! It appeared on Youtube just after this image was originally posted a couple months ago by another Youtuber who copied it from a forum (no problem! You’re welcome). Hence, the creation of this video, now that I’m sure.